Blog is picture-heavy and may take a long time loading on some computers.

(Above stamp used with the expressed permission of SonicMinion at DeviantART.com. See below gadget for link.)

Links to Stamps Used with Permission

Smart, playful with an off switch, sneaky, cute, funny, quirky, and tolerant

Be Careful on the Web!

Music (Click pause if you want it to be quiet)

Treader went to heaven a few weeks ago. He was dealing with heart failure for some months. To my understanding it was likely a heart disease he was born with. He had been diagnosed with a heart murmur back in 2013, and put on medication. About September of last year he began showing a light, persistent cough. By late December it had transferred to a wet, honking cough.

We didn't find out until June that it was heart failure. I have had very little money to do anything with, and could not afford to get him tested, or I might have known sooner. (Especially because my expenses were further divided because the cat had been diagnosed with kidney disease--a misdiagnosis that cost me a lot of money. I have found another vet since then.)

On the morning of August 16 I had just given Treader his medicine. Moments later his heart decided it had finally had it. He was rushed to the vet and humanely euthanized.
I am glad that I was able to get to him right away and he didn't suffer any longer than he had to. He did well with his illness and survived longer than the vet expected him to. The medication kept him comfortable and happy for as long as time allowed.

I was 14 when we adopted him. We had nine years together. I don't know if animals go to heaven or if they just stop existing when they die. I don't know anymore. But I'll always treasure the time we had. I'll never forget him. 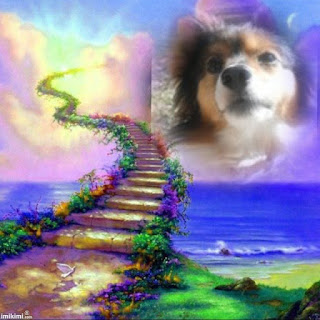